HELLA and Faurecia combine their Businesses

TMHA to become Sponsor of NRL Canberra Raiders for 2022-23

From modest origins starting out as one man and a tipper truck back in 1996, Riordan Grain Services (RGS) has grown over the past two-and-a-half decades to preside over an increasingly diverse range of services for both its domestic and international customers, with it now at times running in excess of 100 trucks per day. 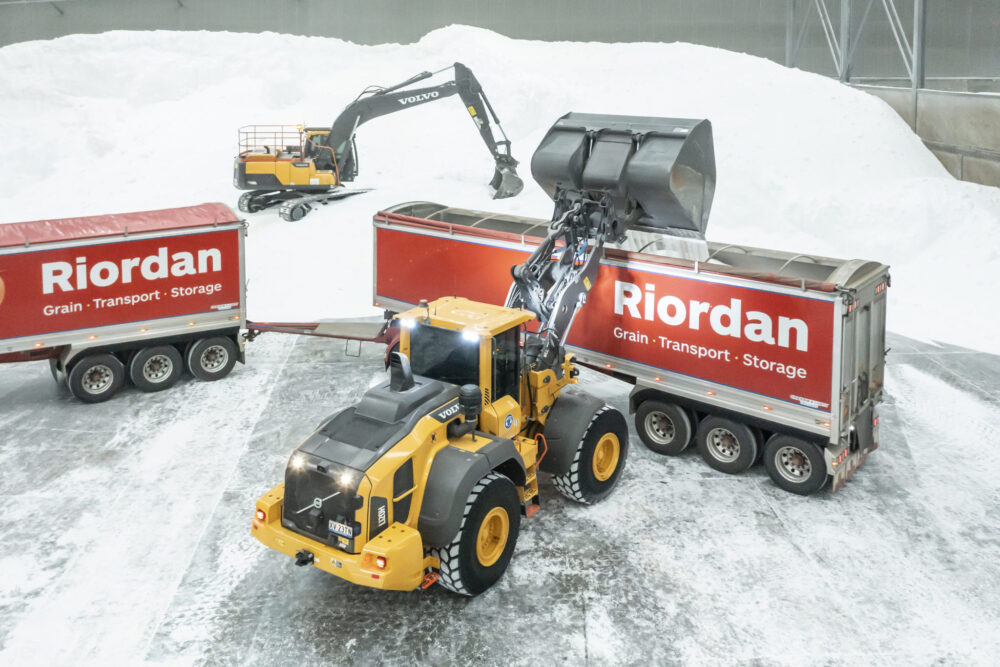 In a highly competitive and evolving industry, it has taken plenty of hard work for the family-owned enterprise to get to where it is today, with Managing Director Jim Riordan stating that deregulation of the grain market was a critical point in the company’s history, paving the way for a raft of opportunities.

As RGS marks its 25th anniversary this year, Jim highlighted a number of milestones the company has achieved in the wake of deregulation, which has effectively allowed it to expand the scope of its operations and gain a foothold in the export market. Jim told EEM:

“Packing containers as a company and exporting grain throughout Southeast Asia was a milestone. Another milestone was the construction of our purpose-built bulk storage complex at Geelong, storing and housing fertiliser for the expanding fertiliser industry.”

“And a third major milestone came in 2017, when we started loading bulk grain vessels through our own system at Geelong and Portland, to the point where we’ve now loaded over 1,000,000 tonnes of grain onto vessels.”

As it stands, RGS, which is based out of the Victorian town of Lara, north-east of Geelong, has grown to oversee an integrated logistics network comprising transport, accumulation, storage, bulk commodity handling and packing services.

Complementing its transport capabilities, Jim explained that the storage arm of the business encompasses 75,000m2 of floor space, allowing for housing of a range of bulk commodities, including fertiliser and grain-related products. He said:

“We also own several grain storage receival facilities, and can store in excess of 300,000t of product across multiple sites. We directly employ about 100 people on a daily basis, and then many contractors after that, who help us do the work when the work is there to be done.”

A hands-on approach to operations

While RGS has steadily expanded over the years, a hands-on approach still very much applies across the scope of its operations, with Jim explaining that its basic, underlying focus remains the efficient movement of trucks. He told EEM:

“We always focus on the efficiencies of getting people in and out of our system, because we think about the truck not waiting. We work with farming communities, all the way through to export customers all over the world, and we do it all ourselves and know every step.”

“I don’t think there’d be a thing in this business, other than maybe a couple of computer programs, that I couldn’t operate. Also, I think our point of difference is that we are the only family-owned grain business that’s loaded export ships out of Australia, as everything else is done by corporates.”

Jim pointed to variability in weather conditions as being a challenge that comes with the territory – with droughts one year, followed by strong rainfall, and consequently plenty of grain to move, the next – having the potential to significantly impact business year in, year out.

However, one thing firmly within RGS’s control is the calibre of the equipment it uses, with Jim explaining that his long-held views on what’s required to get the job done has seen RGS utilise specific machinery across different areas of its business.

“Most people say, ‘what do you run?’, and I say: John Deere tractors, Toyota cars, Kenworth trucks and Volvo loaders,” he commented. “Principally, that’s what we’ve stuck to for a long, long time.”

“And the Volvo loaders, I think we’re up to our 15th Volvo loader now operating within the business, ranging from zero hours, brand new, up to 30,000 hours.”

The Volvo L120H wheel loader weighs in at an operating weight of 19,640kg, and runs a 203kW Volvo D8J Tier 4 Final/Stage V engine, with it decked out to deliver power and productivity, while enabling a smooth operating experience.

As explained by Noel Fernando, CJD Regional Sales Manager, the L120H loaders being run by RGS have been set up with a 7m3 high tip bucket, and are specially designed for operation in the harsh fertiliser and grain environment. Noel told EEM:

“The loaders are specifically fitted with reversing fans, electrical and hydraulic corrosion protection, and are also fitted with a single joystick control system to cater for the variety of operators at RGS.”

“In addition to this, Volvo quick hitches, allowing for the speedy changing of various attachments, make the L120H a multipurpose machine on site.”

Noel highlighted that operator comfort is a principal consideration in the design of the L120H, right down to the finer details, ultimately boosting performance. He said:

“Volvo loaders are designed and built around the operator, with industry-leading cabin comfort, responsive controls, smooth transmissions and low fuel consumption, enabling operators to complete their work in comfort and safely, leading to increased productivity and ROI.”

“Meanwhile, for RGS, easy access to servicing and repairs by our two Geelong-based technicians lowers operating costs and downtime.”

Jim confirmed that operator comfort is a strong focus for RGS, with staff undertaking 12-hour shifts needing to be able to operate the loaders across different applications with minimal fatigue. He observed:

“The other factor is the serviceability of the machines, which are very efficient to service and maintain. We fertiliser-spec the machines, which helps to protect all the fittings and electrical looms, and we also fit auto-greasers, so that they’re consistently getting heavily greased.”

Noel told EEM that CJD and RGS have maintained “a long and successful working relationship”, with CJD – which oversees a network of dealers and service centres across Australia, along with a team of field service mechanics – at the ready to provide support as needed.

In particular, Noel pointed to the importance of maintaining open communications in ensuring the loaders are primed to get the job done in a work environment which presents its own specific set of challenges. He commented:

“Jim is very hands-on and is very much involved in the specifications of the machines for their applications.”

“As a longstanding client, CJD has a productive relationship with both Jim and the RGS operational management team, along with their operational staff, who I regularly communicate with to enable feedback.”

Jim described CJD as having been “fully supportive” over the years, in particular highlighting its after-sales service support, which keeps RGS’s fleet of loaders in premium operating condition, ensuring they are on hand to be deployed as required.

“They fully maintain the fleet, and do an exceptional job, and I wouldn’t change that,” he said. “Having minimal downtime, and the machines fully serviced and maintained 100 per cent of the time, is a key for us.”

The industry continues to adapt amid challenges

While industries across the board have in recent times been facing challenges brought about by the Covid-19 pandemic, Noel noted that the earthmoving, and grain and fertiliser sectors have generally remained busy. He commented:

“The Covid situation has certainly slowed many processes, and has changed the way we go about our daily tasks. However, we have evolved our practices in line  with the additional restrictions, with a focus on safety and the protection of our workplaces.”

Jim pointed to the necessity of maintaining continued operations in the grain and fertiliser sector, despite the additional challenges being faced, noting that RGS has remained active across the different areas of its business. He said:

“We’re extremely fortunate, given the industry that we’re in, with grain, transport and logistics being an essential service business, and every facet of what we do is related to agriculture and logistics.”

As for what the future holds, Jim stressed that sustainability is a key focus for RGS moving forward, with the business keen to integrate new, low-emissions technologies across its operations.

With this in mind, he pointed to opportunities that exist within the transport and logistics sector amid the ongoing development of electric vehicle technologies. He commented:

“We’re very heavily focused on where we go in the next 10 years from a sustainability point of view.”

“If we can have a range of batteries within our facilities, have them charged by the sun on our roofs, and basically clip those batteries in and out when they’re due to be, this will help develop a sustainable carbon footprint in the future, for both our trucks and loaders.” 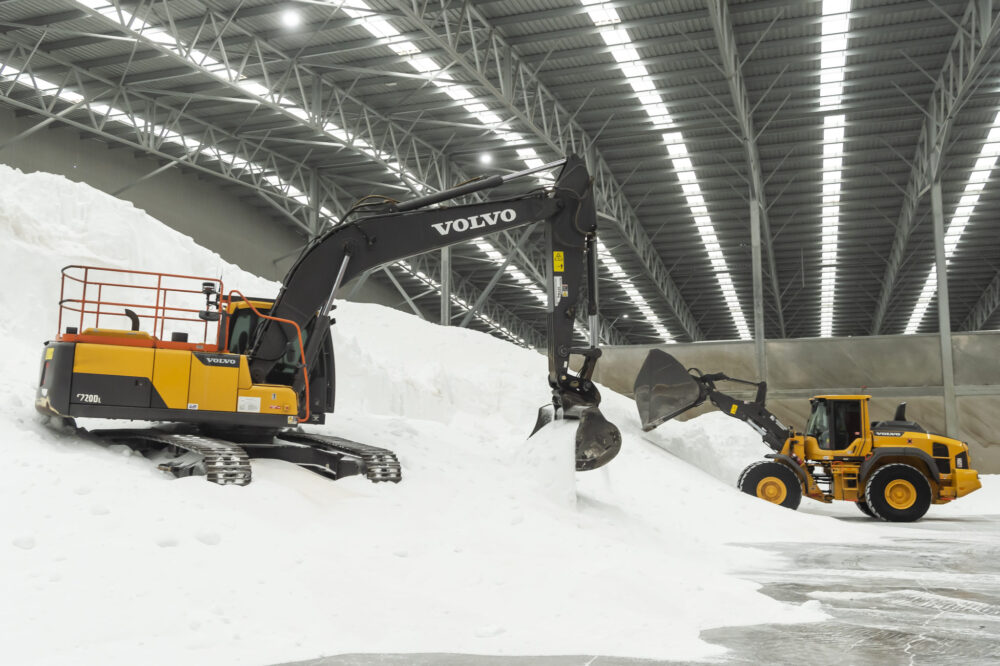