Russia’s invasion of Ukraine has triggered a major energy supply and security crisis that has sent commodity prices to new highs, with wider implications for the global economy. 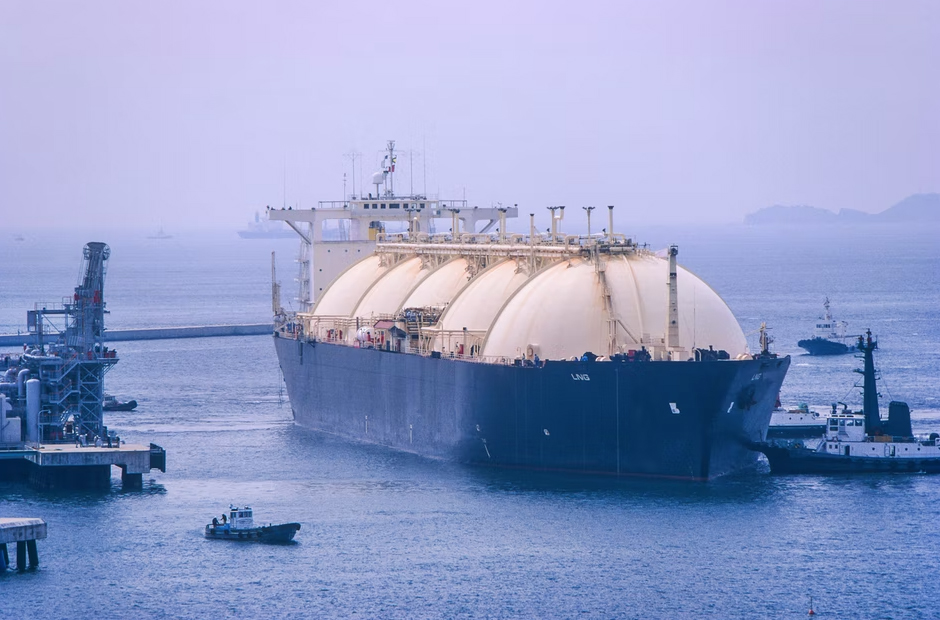 The conflict has put further considerable pressure on natural gas markets and raised uncertainty in the context of an already tight market. Europe has been at the epicentre of market tensions since the beginning of the heating season, resulting from the combination of lower than average underground storage inventory – principally from sites partly owned or controlled by Gazprom – and a sharp year-on-year drop in Russian pipeline supplies. Lower Russian supplies have largely been compensated by LNG, turning Europe into the premium market and drawing cargoes away from Asia Pacific and other regions. The resulting tight supply, high prices, and heightened market uncertainty have led to a downward revision in global gas consumption growth, which as a result is expected to turn negative for 2022.

Besides the human tragedy it is causing, the invasion of Ukraine by Russia on 24 February has triggered a major energy crisis. This has wider repercussions for the global economy that will negatively affect economic growth and support rising inflation through higher commodity prices. The conflict has added further pressure and uncertainty to an already tight natural gas market. Europe’s natural gas supply has been a topic of concern since mid-2021 as storage inventory levels have remained well below average – especially in sites directly or indirectly controlled by Gazprom.

The continent’s storage opened the heating season 17% below its five-year average, and 22% below the previous year’s level. The close to 25% year-on-year (y-o-y) drop in Russian pipeline flows during the 2021/22 heating season further exacerbated market uncertainty. European short-term prices have reached all-time record highs since the beginning of the conflict as Europe became the premium market this past winter and attracted massive LNG flows to compensate for the sharp decline in Russian pipeline deliveries. LNG diversions to Europe were key to balancing winter consumption. The competition for flexible LNG cargoes pushed Asian spot prices to a record high and led to further curtailment in price-sensitive importing markets, particularly in emerging Asia. Price volatility also reached record levels as a result of unprecedented uncertainty.

This report revises global natural gas consumption growth for 2022 from a previous 1% to slightly below zero, which is equivalent to a negative demand revision of 50 bcm compared to the previous quarterly report’s forecast. Almost all regions have been revised downwards, with a large share of the impact in the Asia Pacific region, on a combination of a downgraded economic outlook from high commodity prices and the risk of physical limitations on access to LNG – especially for pricesensitive buyers with a higher exposure to short-term LNG procurement. Natural gas consumption in Europe and Eurasia, which was already expected to decline in 2022 after strong contributions from weather-related demand in 2021, has been further revised downwards. Consumption in these regions during 2022 is anticipated to fall by close to 6% and 5% y-o-y, respectively. Other regions are so far expected to be less directly affected by international gas trade tensions as they principally rely on domestic production.

They would nonetheless be affected by the indirect macroeconomic consequences of the conflict on their domestic economies and gas markets. The outlook remains highly uncertain, and further downsides can be expected, especially in emerging gas importing markets, as a result of lasting supply tensions, high prices and volatility. 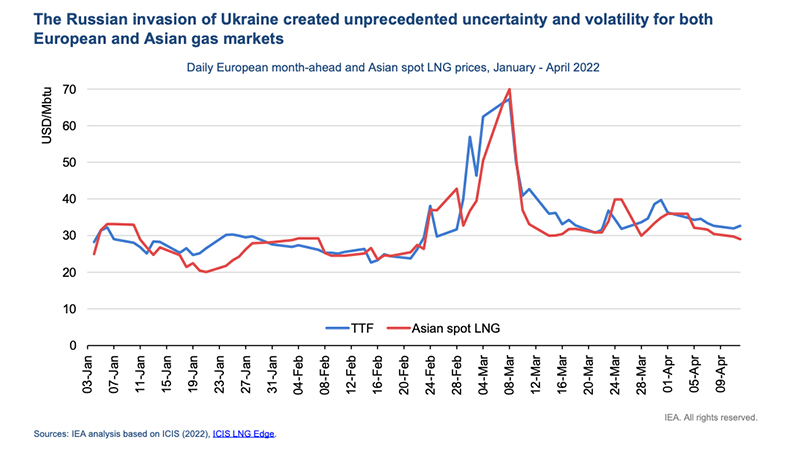 Natural gas demand experienced strong growth in 2021, despite a challenging end of year

This strong growth resulted from the combination of a rebound in economic activity after the lockdowns of 2020, boosting consumption in the industrial and power generation sectors, and a succession of extreme weather events that led to higher than expected heating and power generation needs. Growth slowed significantly in the second half of 2021 due to a challenging price environment and softening of the economic recovery.

A year of two halves Natural gas consumption experienced high growth rates in the first half of the year. In the first quarter it increased by an estimated 6% y-o-y globally. Weather-related factors played a strong role, as early 2021 was colder than the exceptionally mild winter of 2019/20 in the northern hemisphere. A rebound in economic activity also had some impact in Q1 2021, especially in China, which was hit by the pandemic in the first quarter of 2020. The bulk of the effect of economic recovery was visible in Q2 2021, with an estimated quarterly rise in gas consumption of above 8%, a year on from the greatest impacts of Covid-induced lockdown measures in 2020. While all regions benefited from this rebound, Europe was particularly affected because of the severe drop in consumption observed in Q2 2020, leading to a 23% y-o-y increase in the second quarter of 2021. The recovery coincided with weather-related factors, including a colder spring in Europe and record droughts in South America, which prompted a surge in gas consumption for power generation in Brazil to compensate for the lack of hydro capacity.

Growth in gas consumption slowed significantly in the second half of 2021, at about 3% in Q3 and down to 1% in Q4. This resulted from the diminishing immediate impact of recovery and a tightening global gas market that prompted a steep rise in spot gas prices in Europe and Asia. This challenging environment led to slower consumption growth, fuel switching away from natural gas and in some cases demand destruction. The industrial sector provides a good illustration of this trend, with monthly consumption data from major markets clearly emphasising at first a jump in gas consumption compared to 2020 in the first half of 2021, then slower growth in Q3, and finally negative growth in the closing months of 2021 on a combination of lower economic activity, periodic gas supply constraints and soaring fuel prices. 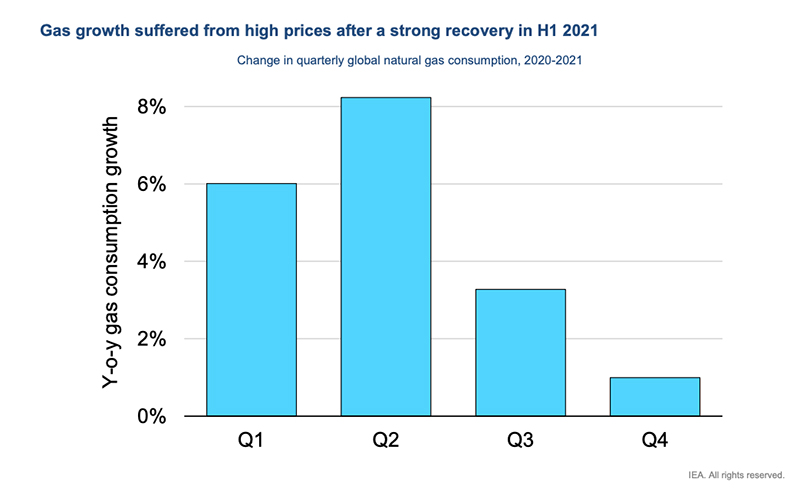 Global LNG trade expanded by 6% in 2021, slightly below the 7% average rate in the 2015-2020 period, but much faster than the 1% increase in 2020. The Asia Pacific region saw an 8% increase in LNG imports and accounted for more than 95% of the net growth in LNG trade globally. China (up by 17%) and Korea (up by 14%) were the largest contributors in volume terms, particularly in the first three quarters of 2021, and China became the world’s biggest importer of LNG last year. Emerging Asia’s LNG imports rose by 14%. Japan’s imports were flat, while India experienced an 11% drop in LNG imports in 2021 (the first annual decline since 2013). Central and South America was the second largest contributing region to global LNG import growth, with a 69% increase in 2021. This was mainly driven by Brazil, where the worst drought in nearly a century led to a threefold increase in LNG demand.

LNG imports into the Middle East registered a 2% increase in 2021, as a sizeable 36% jump in Kuwait (enabled by the country’s new Al-Zour terminal) more than offset substantial declines in Israel, the United Arab Emirates and Jordan. North America’s LNG intake halved in 2021 as both the United States and Mexico reduced LNG imports in favour of cheaper domestic supply and pipeline gas imports, respectively. European LNG imports declined by 6% in 2021, despite a sharp rise in Q4 when LNG arrivals soared by 38% y-o-y to offset reduced pipeline gas supplies from Russia. Croatia was the only new importer of LNG last year, recording nearly 2 bcm of inbound flows in 2021.

Global LNG export growth was dominated by the United States, which was responsible for all of the net increase in LNG supply in 2021. Australia, Qatar, the United States and Russia remained the four leading exporters of LNG, together accounting for more than two-thirds of global LNG supply last year. US LNG exports registered a remarkable 50% increase in 2021 and were up by nearly 60% y-o-y in H2 as soaring spot LNG prices pushed US terminals to operate at full capacity in the second half of the year. LNG supply from the three other large producers combined was up by 2%.

Egypt recorded a more than fourfold increase in LNG exports thanks to the restart of the Damietta terminal in February 2021. Malaysia registered a 6% increase in 2021 following steep curtailments during the price collapse in 2020. Other suppliers experienced substantial declines, including Norway (down 98%), Trinidad and Tobago (down 34%) and Nigeria (down 17%). LNG volumes traded on a spot or short-term basis accounted for 37% of global LNG trade in 2021, the highest share on record. China remained the largest importer and the US the largest exporter of spot and short-term LNG volumes.

Natural gas spot prices made a strong recovery in all major markets in 2021, driven by tight market fundamentals. This was exacerbated by the behaviour of Russia in reducing gas supply to Europe despite spare supply and transport capacity being available, which sustained both Asian and European spot prices. In the United States, Henry Hub prices almost doubled in 2021 to an average of USD 3.9/MBtu – its highest level since 2014. In Europe, TTF prices rose fivefold to an all-time high of USD 15.8/MBtu. In strong competition for flexible volumes of LNG, Asian spot LNG prices followed a similar pattern, rising more than fourfold to over USD 18/MBtu – their highest level in our records. Recovery in economic activity, together with the resumption of travel, exerted upward pressure on prices. Brent prices rose by almost 70% from their 2020 levels to reach an average of USD 70 per barrel in 2021 – their highest levels since 2018. Considering that over 50% of traded LNG is indexed to oil and oil products, higher oil prices lifted LNG prices in contracts with oil-based formulae. This impact was particularly visible in the third and fourth quarters of 2021 due to the price-setting window typically included in oil-indexed contracts. 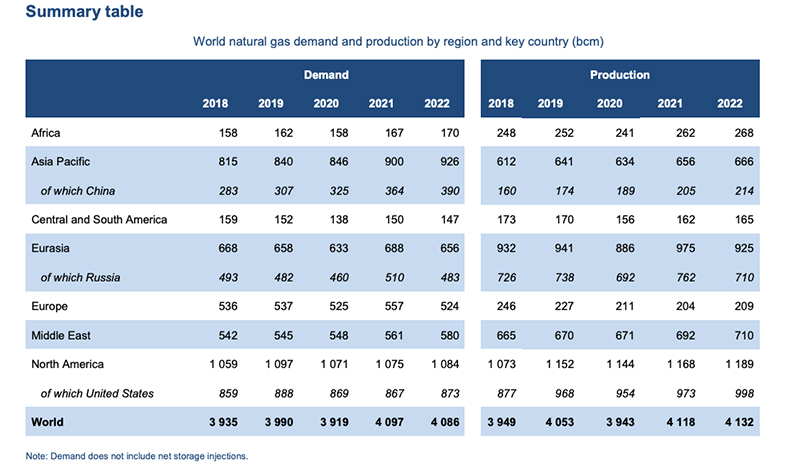 To Read the full report: IEA