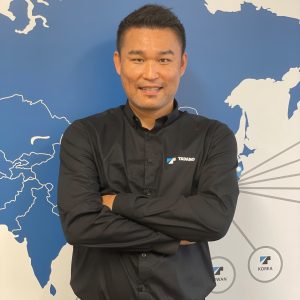 “The recent success has been a huge team effort and I truly believe we have extremely talented people within our business” –Mr. Takehiro Kusumoto

Straight from University, Mr. Kusumoto has dedicated his career to the Tadano Group, He has been with the group for 16 years. Started off as the Area Sales Manager for the Middle East market between 2006-2008 based in the Tokyo Headquarters in Japan. Then in October 2008, he transferred to Tadano Faun GmbH as the Area Sales & Product Manager for the All-Terrain business unit in North America, Middle East, Asia, Oceania, Central & South America as well as Africa and CIS. After 6 years in Tadano Faun GmbH, Mr. Kusumoto returned to the Tadano International Sales Department based in Tokyo and was given the responsibility for various regions as Sales Manager.

His official journey with the Tadano Oceania team began in January 2018 as the Assistant Managing Director & Sales Administration Manager. Then in June 2018, Mr. Kusumoto was promoted to Chief Commercial officer before once again being promoted as part of the board of directors in July of the same year.

To give a little insight into Mr. Kusumoto and why Australia will always have a soft spot for him; he traveled all across Australia as a backpacker in 2004 and worked odd jobs to fund his yearlong Aussie tour. Jobs like strawberry picking and working on demolition sites were his main source of income if and when he needed the extra funds. During his travels, he fell in love with the people and culture. The hospitality that this great nation showed him has really stuck and he finds great pleasure in being able to contribute to the ever-growing economy in the way he knows how to and looks forward to doing more within his new position as the Managing Director.

Mr. Kusumoto supports and promotes giving back to our local community through charitable donations and fundraising activities along with a genuine focus on supporting all customers/partners which of most are Australian family-owned and operated businesses.

“Being able to supply them the right machinery and providing the support they need to ensure success for their business endeavours is a huge focus for Tadano.”

The Tadano Group aspires to be #1 Worldwide in the lifting industry and Mr. Kusumoto firmly believes in focusing on key factors which are especially vital in the Oceania region. He believes in the importance of providing state-of-the-art products and services as well as investing in electric products for a sustainable future.

With his impressive track record, leadership, global experience, and connections, there is huge confidence in a bright future ahead for Tadano Oceania and its loyal customers.