AUSA’s C251H all-terrain forklift was launched onto the market during the Bauma 2019 trade show. This machine represented a leap forward in rough terrain forklifts and had technological advances and a significant improvement in 4WD capability. 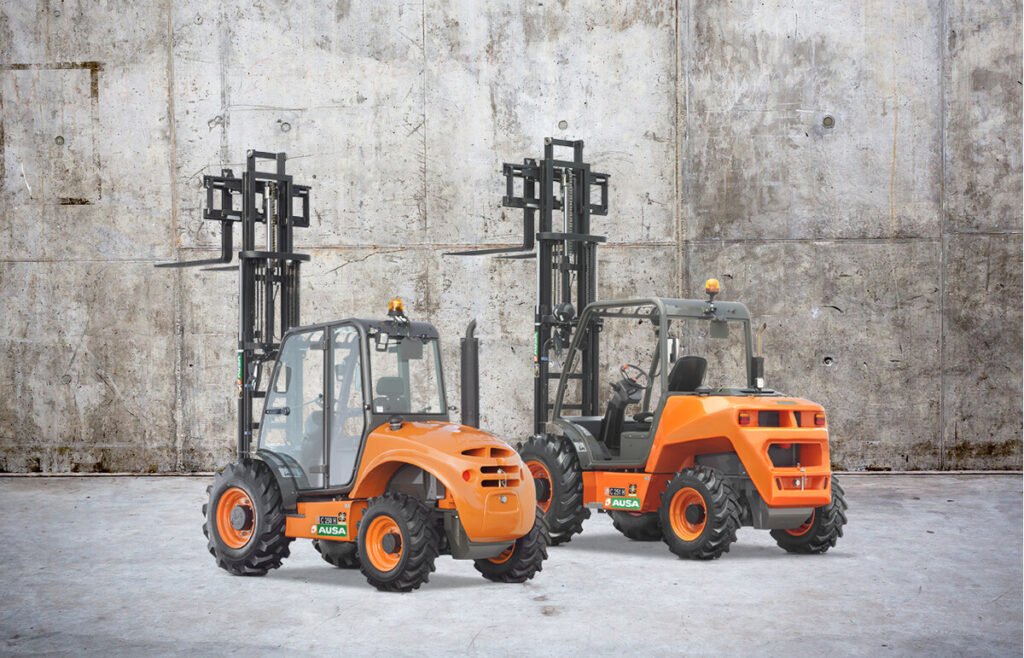 Despite all of the technological advances and equipment upgrades, the C251H had the difficult task of replacing AUSA’s flagship lifting machine, the top-selling C250H forklift.
The now discontinued C250H and C250Hx4 forklifts, originally called the CH250 and CH250x4, were launched in 2000 and, at that time, they also represented a big leap in performance compared to their predecessors: for the first time, they were equipped with a multi-function joystick which enabled simple maneuvering of the mast with a single controller and hydrostatic transmission, which replaced the conventional mechanics, greatly increasing safety and comfort during operation.

With the benchmark set this high, the C251H had to be designed to follow in the footsteps of its predecessor and continue to be one of the leading models on the market, offering sensational features and numerous innovations.

Firstly, the most striking feature is its aggressive appearance, with angular lines, closely aligned with current trends in the automotive sector, and large openings in the counterweight that enable optimized engine cooling and easier access to the radiator. 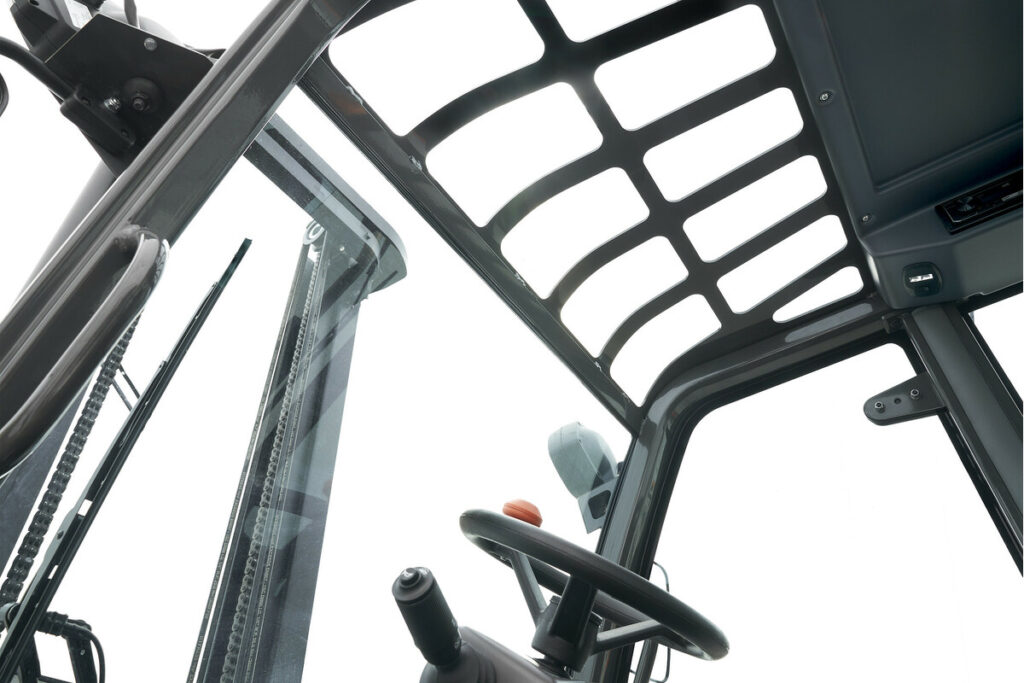 Performance with minimal consumption
One of the standout features of this next generation of machines is their high-performance efficiency, with AUSA striving to lower fuel consumption and reduce the environmental impact of using them. While the C250H was fitted with a 36.5 kW Kubota engine with 158.6 Nm torque, complying with the Stage IIIA low emissions standard, the new C251H is equipped with a 31.2 kW Kubota engine with increased engine torque of 159.8 Nm, compliant with the Stage V low emissions standard, meaning a 20% decrease in CO2 emissions.
Furthermore, as it runs, the new engine is connected to the ECO Mode system developed by AUSA, which automatically adjusts the engine’s revs, to provide the necessary power with lower consumption. It has also been equipped with the Smart Stop system, which helps to reduce fuel consumption and CO2 emissions by a further 5%. This system automatically stops the engine when it is not in use, adapting to the cooling conditions. A technical development of the traditional Start&Stop system found in cars and applied to the industrial machinery sector. 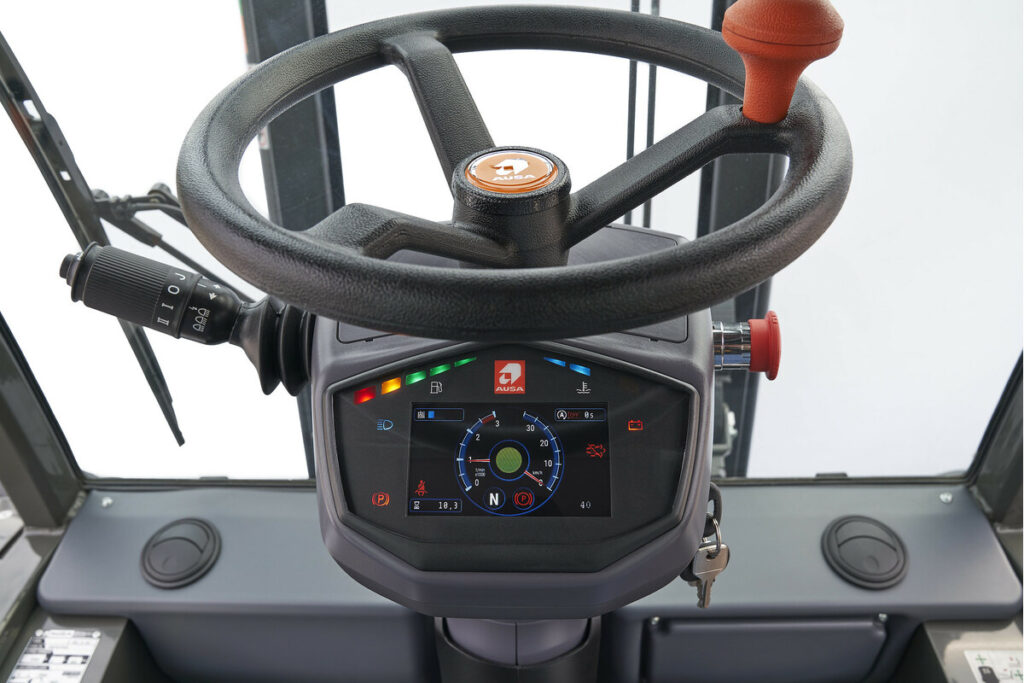 Off-road capability
One of the things that set AUSA apart from its competitors is its FullGrip on-demand drive system, which allows you to enable and disable the forklift’s 4WD mode, depending on whether you need to overcome difficult terrain or you want greater maneuverability. This system was already installed in C250H and CH250 models and it was highly popular. Thanks to this system, the user was able to hold down a button on the joystick to activate the forklift’s off-road drive, thus improving its off-road capability when desired.
With this next generation, the C251’s FullGrip system has been further developed to improve its intelligence, preventing 4WD mode from exceeding 10 km/h. This ensures greater traction on winding roads where speeds are very low, and it automatically reduces the amount of time that this mode is used, resulting in a reduction in component wear and fuel consumption. Additionally, in this new version, you simply have to press a button on the joystick to activate it, while in the C250H forklift you had to hold the button down to keep 4WD engaged.
The overall machine weight of this new version of the 2,500 kg forklift has also been reduced – from the C250H’s 4,400 kg to the new model’s 4,150 kg. This agility allows it to squeeze all the power out of the engine and climb gradients of up to 38%.
Safety
Safety when operating the machine has been significantly improved between the two models of all-terrain forklifts. On the one hand, while the C250H simply had a hydrostatic transmission that allowed it to restrict the speed of the machine and ROPS/FOPS cabs, the new C251H is also equipped with smart active safety equipment: firstly, it features the Hill Holder, a hill-start assist system that keeps the machine completely stationary when you take your foot off the accelerator and the speed is near to zero. This avoids any unintentional movement of the machine that may affect the operator any anything in their vicinity. It is also equipped with an electronic parking brake for greater safety and a steering wheel with adjustable height and reach, ensuring the driver’s total comfort while working.
Similarly, redesigning the forklift has also allowed us to overhaul the cab, changing its structure to increase the driver’s visibility by 30%. Meanwhile, the machine continues to be just as compact as the previous model: 1,520 mm wide.

Low maintenance
The new C251H’s technological innovations do not end there, they all come together in a single digital space: a screen located on the dashboard, where the user gets all of the information about the forklift in real time: speed, RPM, DPF indicators, lights, etc., but it can also be used to run machine self-diagnostics, a major new feature. The onboard diagnostics system is designed to allow you to interact with the screen using the function joystick. You can access any error codes without needing external tools. This innovation allows you to reduce downtime and maintenance costs significantly because, if necessary, the technical work can be performed remotely or, if this is not possible, the technical service knows the source of the fault in advance and comes with the necessary spare parts and tools.

Furthermore, one of the standout features of AUSA’s all-terrain forklifts is the possibility of tilting the cab to provide easy access to all of the mechanical and maintenance components. This was already a feature of the C250H forklift when it was launched in 2000. This function is still available now in the new C251H, but AUSA wanted to go one step further and it has now added a new engine cover at the top of the counterweight, which was not present before. This is designed to improve accessibility to the engine unit and allow all maintenance work to be carried out more quickly, thus reducing the forklift’s downtime when repair work is being performed. 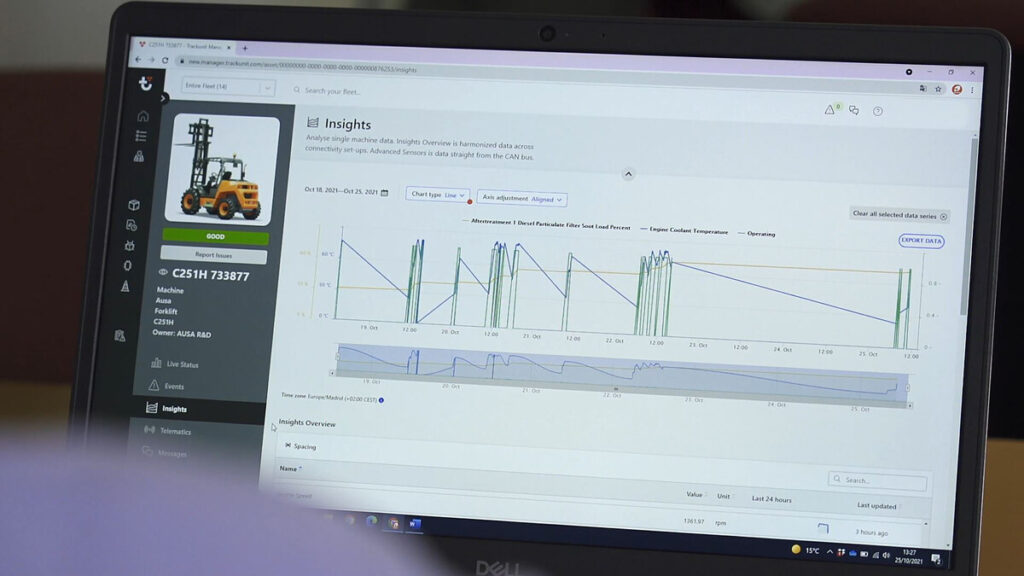 Connectivity
As so much time has passed between the two models, owners of the original C250H forklifts could hardly have imagined that one day they would need to obtain all of the information about their machine remotely, control it using their cell phone or make decisions about future purchases by analyzing data in their office. Thanks to the C251H forklift’s connectivity via AUSAnow, a user can access any real-time information related to its location, speed, distances traveled, daily hours of operation, fuel levels and even saf information, e.g. whether the seat belt is fastened or the parking brake is engaged. 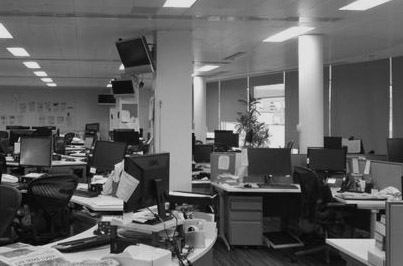