Jaymee Ireland, a qualified technician eager to see more women in mechanical trades in the agriculture sector, has been named Australian Agriculture Service Technician of the Year at the second annual John Deere Technician Awards. 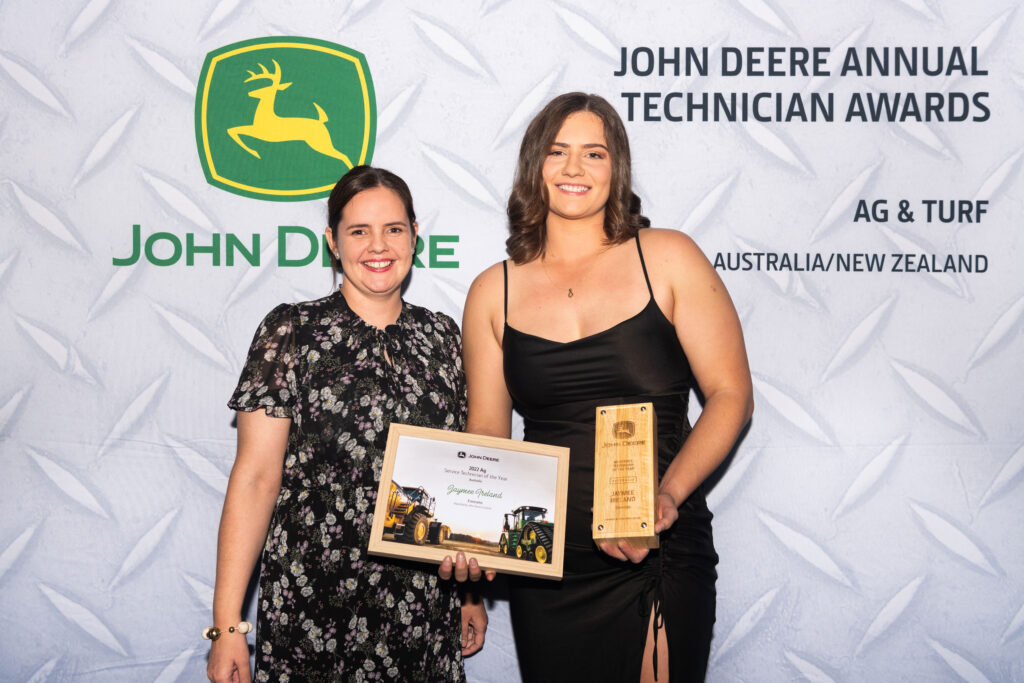 Employed by Emmetts Roseworthy, South Australia, the harvester-specialist rose to the top of a competitive field of more than 100 award nominations from across both Australia and New Zealand.

The hardworking 22-year-old’s interest in heavy machinery was first piqued when growing up near cane farms at Mossman, Far North Queensland, where her grandfather, Charlie Brischetto, showed her the ropes of John Deere harvesters.

Today, she plays an essential role ensuring farmers’ equipment is working at peak performance across her region’s thriving broadacre agriculture and vineyard industries.

“For me, it was an honour just to be nominated for the awards. “All technicians work incredibly hard so it’s special to see that effort being recognized. I have always had a huge love for John Deere, when I was a kid I had John Deere merchandise all throughout my bedroom, so I feel the younger version of myself is very proud.”

With a deep passion for her work, Jaymee is eager to see more young women seize the opportunities of completing mechanical trades within the farm sector.

“Whenever I am attending career days, I am always trying to catch the attention of the girls and bring them over to explain the job. Being a John Deere technician can be so rewarding, as you know you are helping our farmers maximize their uptime and get the most out of their machines. It’s always a great feeling when you can tell a customer is really happy with your work.”

The John Deere Technician Awards were established in 2021 to champion the skill and dedication of the high-performing techs who not only provide vital backup support to customers but also help to ensure operators achieve the best possible performance from their equipment.

John Deere Australia and New Zealand Managing Director, Luke Chandler, congratulated Jaymee and each of the Australian winners and finalists on their outstanding achievements.

“This year’s winners all share extensive technical expertise and a true passion for their work, which made them clear standouts to our panel of judges. People like Jaymee, who are dedicated to supporting operators get the most of out of their equipment, embody the exciting role of a tech, which is ever evolving as the agriculture, turf construction and forestry industries increase their adoption of sophisticated and highly efficient machinery.”

Technicians were nominated by their dealerships, with input from customers, and were judged on their mechanical and technical expertise, as well as their previous accomplishments in the field or on the job.

Australian Parts Technician of the Year

The Australian Parts Technician of the Year was awarded to Brandt Terang Parts Manager, Sarah Lewis.

Growing up in regional Victoria on a small farm around mechanically-minded relatives instilled a fundamental understanding of the crucial role parts play in farming businesses operating under tight timeframes. 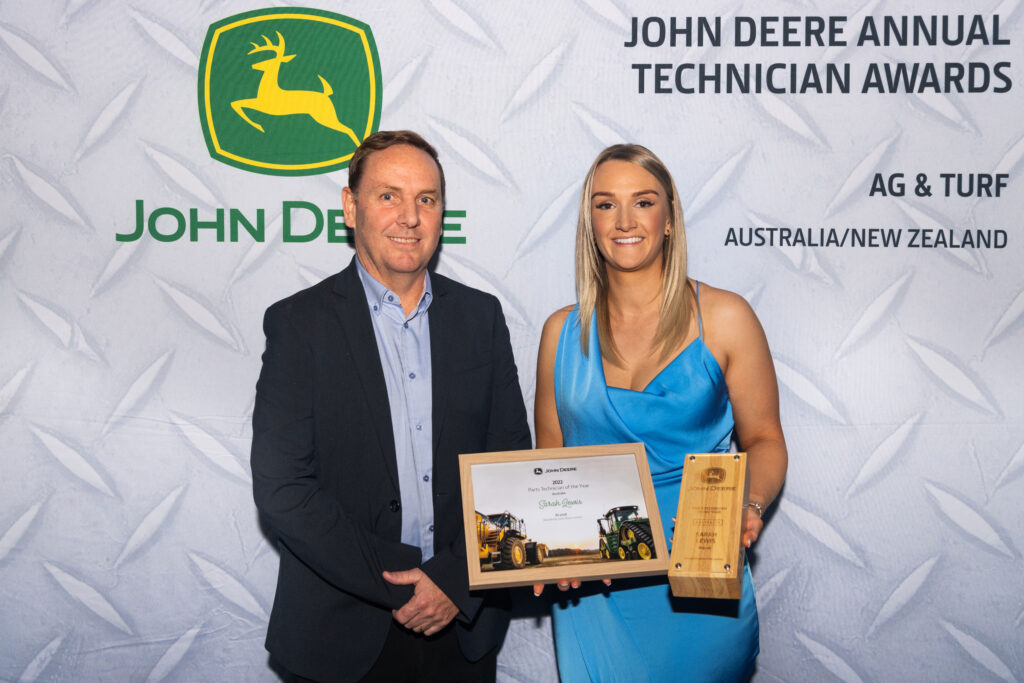 “I feel so humbled to be named Australian Parts Technician of the Year. As a parts technician, each day I am supporting customers by giving them the confidence they are receiving the right parts as timely as possible for their operation. This ensures their operation can be up and running 24 hours a day. With this award, I feel my skillset in supplying parts has been recognized as being among the best in the country, and I feel so proud to be able to showcase the unique skills and talents of parts techs through this competition.”

In the apprentice category, Western Australia’s Mitchell Channer, South Guildford, AFGRI Equipment, was named the John Deere Parts Apprentice of the Year in a competitive field drawn from across Australia and New Zealand. 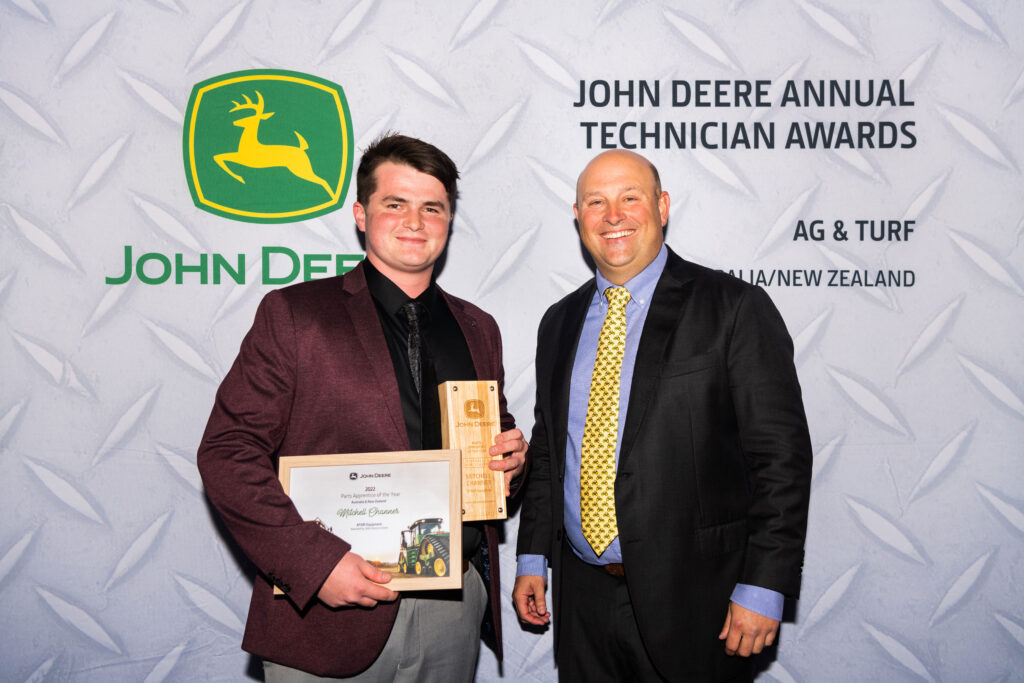 “It meant so much to be named a finalist in the awards, it was a real privilege and I felt proud to be representing my dealership and Western Australia. Now to have won, I feel very honored and I am looking forward to celebrating with my boss and colleagues who have supported me through my training.”

Mitchell has a knack for problem solving and embraces the daily challenges of his role in supplying AFGRI Equipment’s customer base with a vital flow of parts. Customers often say they’re surprised to learn he’s still a trainee as his in-depth knowledge of the John Deere product range is beyond his years.