A family-owned contract growing nursery business has enjoyed a welcome bonus after becoming a customer of Toyota Material Handling Australia (TMHA) for the first time. 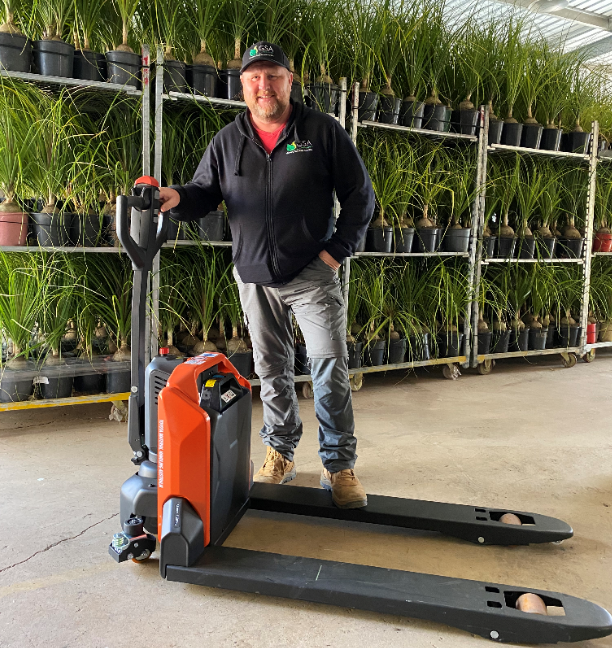 Growing Solutions Australia, based in Cabarlah, Queensland, wanted to purchase its first forklift and chose the superb safety and reliability of TMHA by opting for a Toyota 8FG18 counterbalance forklift to best complement the business.

However Growing Solutions Australia owner Jamie Currie got more than he bargained for after ordering his new forklift, with TMHA area sales manager Max Reindl assisting Mr. Currie to enter into a competition to win an LHE150 electric pallet jack.

As luck would have it, Growing Solutions Australia proved to be a winner in TMHA’s  Grower’s Prize Giveaway promotion with Mr. Currie particularly pleased with the result.

“We don’t win a lot of things but it was brilliant to get the phone call. Max recently delivered the product and went through the product familiarisation, and now we have not only a forklift but a brand-new electric pallet jack. Sometimes you’re just happy with the meat tray at the pub, but this time we won an electric pallet jack which is great!”

Having started Growing Solutions Australia five years ago with his wife, Mr. Currie had previously been using an old forklift that came with the Cabarlah nursery when he purchased it.

However, the need arose for a replacement, with Mr. Currie canvassing the products of multiple brands but eventually settling on Toyota.

He said the advice of friends helped him make what was a simple choice in the end.

“One of my mates who also owns a forklift bought it through the same salesman, Max Reindl. I was talking to him, asking what forklift he got and he said, ‘I just got one recently, I bought it through Toyota, I’ll text you his details.’ It was as simple as that, he texted me his details and from there we made a very simple purchase. Knowing that a colleague also purchased one through Max, knowing that it was a Toyota and knowing the Toyota comes with all these different benefits and its reputation, it was a simple decision for me.”

Mr. Currie sung the praises of the TMHA team led by Mr. Reindl, who facilitated a purchase process that was made as simple as possible.

“The whole purchase process was extremely simple. It was quote, the rep came out and saw me, met with me, discussed the machine, selected the machine, quoted, ordered, paid, delivered. They’re just simple to work with.”

Product familiarisation was also carried out upon delivery of the new machine – a process that was repeated a couple of months later with the arrival of the free electric pallet jack.

Having moved from an older competitor’s forklift, Mr. Currie said the Toyota 8FG18 machine offered a significant step up in features and usability, making for a simple-to-operate machine. 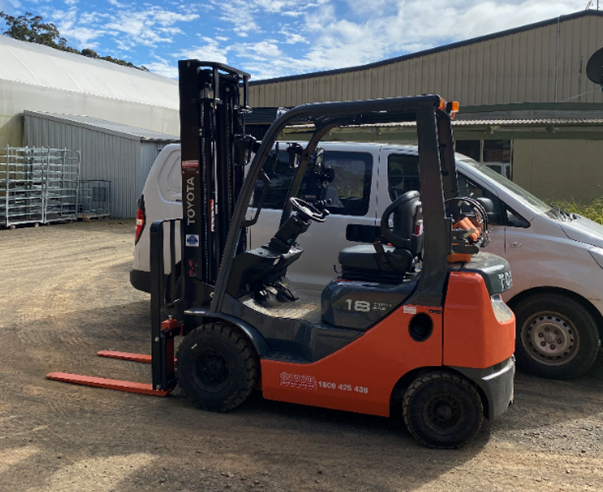 “I’d just say that from the machine that I’ve moved from, from a business owner’s point of view there’s obviously the safety features, and it’s just a very smooth and easy machine to operate.”

With its class-leading safety features including Toyota’s exclusive System Of Active Stability, legendary reliability and excellent customer service, it comes as no surprise that Mr. Currie has been pleased with his decision to switch to Toyota forklifts.

Additionally, the prize of the LHE150 electric pallet jack was an added bonus as it features a compact design perfect for light applications, and a maintenance-free lithium-ion battery for fast charging.

When asked if he would recommend TMHA to others in the industry, Mr. Currie didn’t hesitate to say that he would “100 percent” encourage others to jump on board.

“My response is very clichéd but if you look at people sharing their positive experiences in the media, mine is pretty much the same. From making contact with the rep to the rep coming out and responding straight away, to delivering and having the machine, it was all made very simple. And with the quality of the product – in my opinion, if I compare it to the quality of other products out there, it was a no-brainer for me to go with Toyota.”

Mr. Currie and his wife started Growing Solutions Australia five years ago to work as a contract grower with businesses in the nursery, horticultural and agricultural industries.